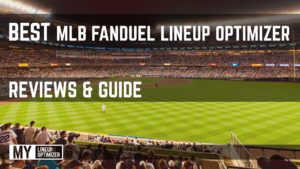 The world of fantasy sport is a community in itself. You know it is true if you have ever owned a fantasy football or baseball league at any point in your life or known someone who has. It becomes a lifestyle. It ends up slipping into most of your conversations. It is one of those almost magical spaces where the boundaries that normally separate the jocks from the geeks and the old from the young disappear in a spate of heated arguments on player performances and statistics. With new technology comes new platforms – one of the most popular ones being FanDuel – and with them comes a set of tools that you can use to excel on the field, like the best MLB FanDuel lineup optimizer we’ll be taking a look at today!

A lot of variables are at work when you make a projection. We are not trained to process all of them manually and we are bound to let a few connections slip and that can have a significant impact on your team and its projected values. Think of it as a fun version of the stock market. There are only a limited number of possibilities that you can manually plan for – that’s where an MLB FanDuel lineup optimizer like Draft Dashboard comes in to save the day. Bursting with modern features and incredibly useful tools, it ensures you get the most bang out of your buck and achieve the most valuable teams possible, everytime.

With top-notch features like the lineup and position optimizer, team browser, sleeper finder, multi-device compatibility and more – all at just $39.95 per month and with two great bonuses on top: a full 30-day free trial and a huge 90-day money back guarantee to boot. To really make Draft Dashboard the market leader, it also works on any sports league and on all of the most popular fantasy platforms – not only FanDuel but also Draftkings, Yahoo’s DFS and more.

Fantasy baseball leagues are about entertainment and fun – with a healthy dose of profit if you do it right too! With Draft Dashboard, you won’t have to spend all of your time doing math and calculating player values proportional to the salary cap. If you did it manually for every single position that you want to fill, you’d have millions of permutations and combinations available which would be impossible to sort manually. Draft Dashboard allows you to quickly and effectively reach the most valuable lineups and give you time to enjoy yourself.

How does the MLB FanDuel Lineup Optimizer Work?

The optimizer essentially uses the ‘knapsack algorithm’ built on combinatorial optimization. In simple terms, imagine you have a backpack that can hold ‘x’ lb. You have a set of boxes, each having a different weight and different monetary value. What the algorithm does is to select those boxes where the total weight of the boxes is less than or equal to x lb while the total value is as large as possible. This is a very simplistic explanation. The algorithm is far more complex with multiple variables that get updated constantly.

Now you may ask “What is my role then if the computer is going to pick the optimum combination?” The answer is simple. The optimizer is a prediction model. It is not always 100% accurate. More so, you are not dealing with actual fixed values and numbers. They are fantasy projections. They are estimations, possible trend lines. So they need to be optimized to see how likely the predictions are to come true. Besides, the Draft Dashboard MLB FanDuel Lineup Optimizer is not you – it does not take into account unpredictable events like sudden weather changes, injuries or other strange things that seem to happen on the field. Those are the dimensions you account for while building your lineup. This is what separates fantasy sports from blind betting. It is not simply about luck, it takes dedication, talent and human input.

The optimizations are simply suggestions that will give you a noticeable competitive advantage. Why not take it then? You can even use the lineup optimizer to create multiple rosters if you are playing in a longer tournament too!

The biggest concern traditional players of fantasy baseball have is that the human touch is getting restricted with the use of optimizers, but that’s not true. No optimizer is going to guarantee you a win. It is also not going to make decisions for you. What it provides is a cumulative summary of all the statistics and choices based on that. It does not take into account emotions or instincts. There might even be a case where the number one option has a player you absolutely loathe. You have every right to remove him from your team and fill the position with somebody else.

For those who have recently entered this world, fantasy sport is played and managed online. You build up our own league with real players and their statistics. The team that you put together is of course imaginary and you get to win or lose when your team players’ statistics are converted and aggregated into points. Most importantly, you get to experience what it is to be a manager of a league team.

Traditionally, if you own a fantasy baseball team, you would maintain it through an entire game season, trading players, following their performances, health and such and the champions of the fantasy league are declared at the end of the game season. But we have gotten impatient. So, a quicker version of this called Daily Fantasy Sport (DFS) came into popularity, conducting daily contests or at the most weekly ones.

Let us say you are really into Major League Baseball. You can play the fantasy version of the games in multiple ways. You can make your team play head-on against an opponent team and accumulate points. You rise in levels with more wins you have, just like in the professional sport. Another way of playing fantasy baseball is the rotisserie style. The cumulative statistics of your team over a predefined period generates a ranking system which will then determine whether you win or lose. Just like the cooking appliance, you rotate your players to ensure the overall value of the team is increasing.

How can one possibly do all of this? For starters, you need to be really crazy about baseball. You would spend hours tracking the games, maintaining records of the players before you build up your MLB team online. Depending on the level at which you are playing, there are caps on salary and how much money you can spend in a given season.

The Business of Fantasy

Fantasy sports generated a whopping $7.22 billion in the United States and Canada as of 2016 according to a press release done by the Fantasy Sports Trade Association. From where does all this money come from? Not including the sponsors, you, as a team manager pay to enter the major leagues, pay for trades or upgrades and at times even to a neutral third party to be the league referee in case of a dispute. The world of fantasy baseball is not small. It has a lot of people performing a lot of roles and generates substantial amounts of money by itself. We haven’t even included the betting pools in this equation yet.

Draftkings and FanDuel are two of the largest companies in the US that provide for DFS contests and betting platforms for some of the major sports in the country. MLB is a huge part of it. Between the two of them, they own about 90% of the market share.

How to Build Your Team

Considering the amount of money involved and that fantasy sports have become a serious sport in themselves, building a proper team is of utmost importance if you want to taste victory. Given the salary cap you are working with, your skill likes in assembling the best possible lineup and accumulating the most number of points.

As somebody building up an MLB team, you need to create a lineup of about 25 players with very specific roles. You have to choose the main catcher, the infielders, the outfielders and the main and relief pitchers, not including the substitutes.

Now, there are two ways you can go about doing this. You go the traditional way and do your research manually, poring over statistics and balancing points with how much you can afford and build your line up. The second option makes your life simpler. You can go for the Draft Dashboard MLB FanDuel Lineup Optimizer which will suggest optimum lineups from which you can choose.

A lineup optimizer does your research for you. For instance, the MLB FanDuel Lineup Optimizer will collate and study the latest statistics of players in the major league and make predictions of their performances in the immediate future. It can also create and analyze which combination of players will have the highest value in terms of fantasy points at optimal cost.

In simpler terms, an optimizer saves you tons of your time. You can enjoy watching MLB for the sheer joy and adrenaline of it without having to take notes. You also would not lose out on your fantasy team because the optimizer has done the preliminary work for you.

An MLB FanDuel Lineup Optimizer is pretty flexible. It is not a universal algorithm that churns out the same results for everyone using it. There are versions where you can add in your own preferences and redefine your roster. You can choose or reject performances from specific games, build your own projection models, study projected ownership, exchange players, reserve players who will be central to your team and so on. It lets you modify your team in whatever way you see fit.

The best way, we think, to draft your league baseball team is to use a combination of the optimized results that the Draft Dashboard MLB FanDuel Lineup Optimizer produces coupled with your own personal observations and choices. With this combination, your fantasy MLB experience is guaranteed to be awesome and highly successful. Thanks for reading and good luck! If you’re interested in learning more, be sure to read our main MLB lineup optimizer article.